Alabama is a state located in the southeastern region of the United States. It is bordered by Tennessee to the north, Georgia to the east, Florida and the Gulf of Mexico to the south, and Mississippi to the west. Alabama is the 30th-most extensive and the 23rd-most populous of the 50 United States. At 1,300 miles (2,100 km), Alabama has one of the longest navigable inland waterways in the nation.

From the American Civil War until World War II, Alabama, like many Southern states, suffered economic hardship, in part because of continued dependence on agriculture. Despite the growth of major industries and urban centers, White rural interests dominated the state legislature until the 1960s, while urban interests and African Americans were under-represented. African Americans and poor whites were essentially disfranchised in 1901, a status that continued into the 1960s.

Following World War II, Alabama experienced growth as the economy of the state transitioned from one primarily based on agriculture to one with diversified interests. The establishment or expansion of multiple United States Armed Forces installations added to the state economy and helped bridge the gap between an agricultural and industrial economy during the mid-20th century. The state economy in the 21st century is dependent on management, automotive, finance, manufacturing, aerospace, mineral extraction, healthcare, education, retail, and technology.

Alabama is unofficially nicknamed the Yellowhammer State, after the state bird. Alabama is also known as the “Heart of Dixie” and the Cotton State. The state tree is the Longleaf Pine, and the state flower is the Camellia. The capital of Alabama is Montgomery. The largest city by population is Birmingham, and largest city by total land area is Huntsville. The oldest city is Mobile, founded by French colonists. 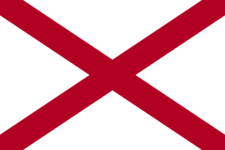