The Province of Georgia (also Georgia Colony) was one of the Southern colonies in British America. It was the last of the thirteen original American colonies established by Great Britain in what later became the United States. In the original grant, a narrow strip of the province extended to the Pacific Ocean.

The colony’s corporate charter was granted to General James Oglethorpe on April 21, 1732, by George II, for whom the colony was named. The charter was finalized by the King’s privy council on June 9, 1732. Oglethorpe envisioned a colony which would serve as a haven for English subjects who had been imprisoned for debt. General Oglethorpe imposed very strict laws that many colonists disagreed with, such as the banning of alcohol. Oglethorpe disagreed with slavery and thought a system of smallholdings more appropriate than the large plantations common in the colonies to the north. However, land grants were not as large as most colonists would have preferred. Oglethorpe envisioned the province as a location for the resettlement of English debtors and “the worthy poor”. Another motivation for the founding of the colony was as a “buffer state” (border), or “garrison province” that would defend the southern part of the British colonies from Spanish Florida. Oglethorpe imagined a province populated by “sturdy farmers” that could guard the border; because of this, the colony’s charter prohibited slavery. 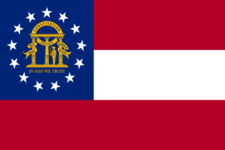