Nebraska is a state that lies in both the Great Plains and the Midwestern United States. The state is bordered by South Dakota to the north, Iowa to the east and Missouri to the southeast, both across the Missouri River, Kansas to the south, Colorado to the southwest and Wyoming to the west. Its area is just over 77,220 sq mi (200,000 km2) with almost 1.9 million people. Its state capital is Lincoln. Its largest city is Omaha, which is on the Missouri River.

Indigenous peoples including Omaha, Missouria, Ponca, Pawnee, Otoe, and various branches of the Lakota (Sioux) tribes lived in the region of present-day Nebraska for thousands of years before European exploration. The state is crossed by many historic trails and was explored by the Lewis and Clark Expedition.

Nebraska is composed of two major land regions: the Dissected Till Plains and the Great Plains. The Dissected Till Plains is a region of gently rolling hills; the state’s largest cities, Omaha and Lincoln, are in this region. The Great Plains occupy most of western Nebraska, characterized by treeless prairie, suitable for cattle-grazing. The state has a large agriculture sector and is a major producer of beef, pork, corn, and soybeans. Two major climatic zones are represented in Nebraska: the eastern half of the state has a humid continental climate (Köppen climate classification Dfa), and the western half, a semi-arid climate (Koppen BSk). The entire state has wide variations between winter and summer temperatures, and violent thunderstorms and tornadoes happen primarily during the spring and summer, though these storms can also occur in the autumn. 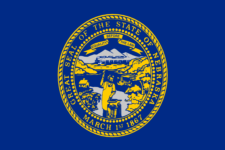